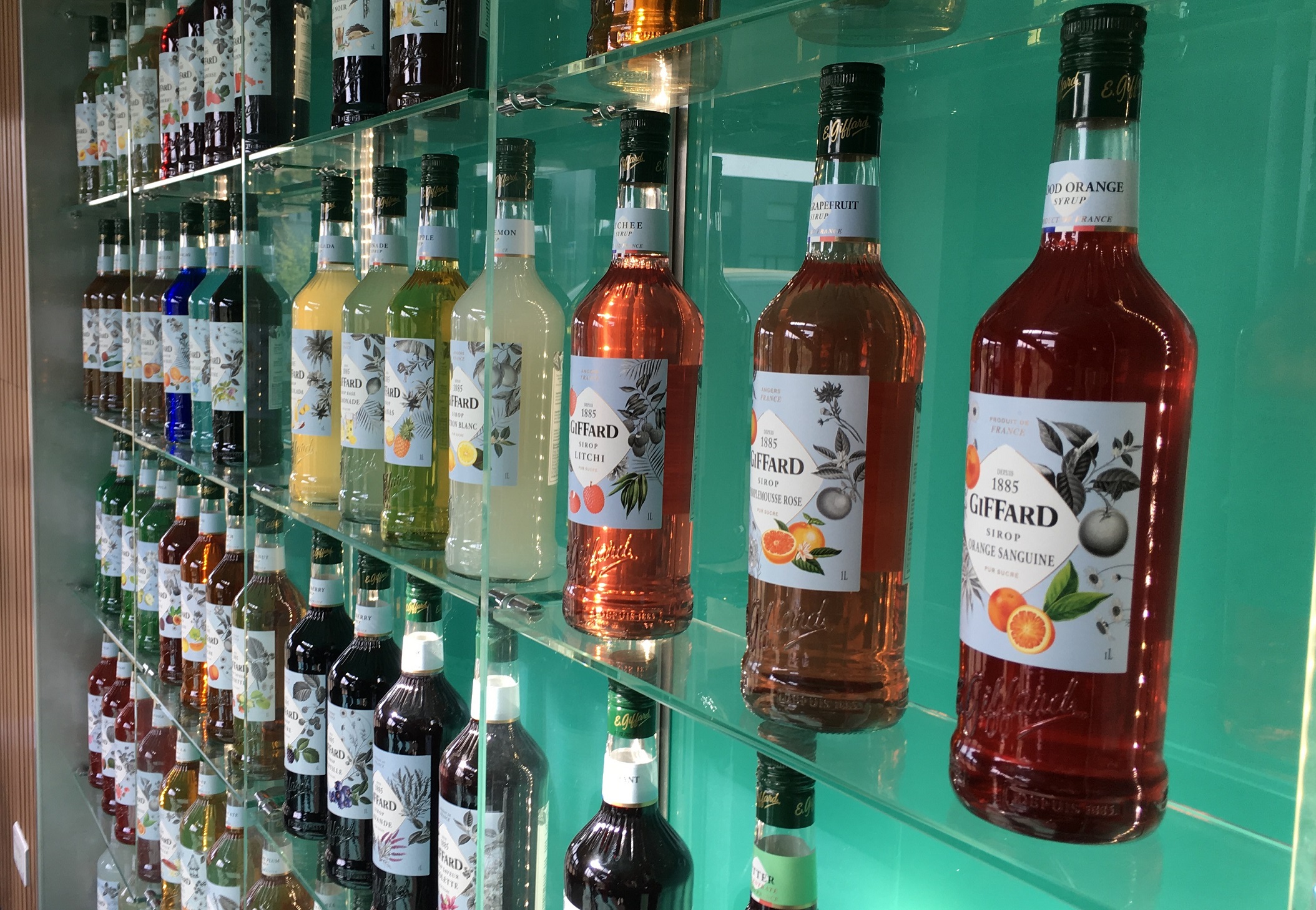 Behind the scenes of the Giffard liqueur company

The company was founded in 1885 (founder Emile Giffard was a pharmacist who created the company’s flagship liqueur, Menthe-Pastille) and is still run by the founder’s descendants. It produces a range of 60 liqueurs and 90 syrups from its facilities in northeastern France.

As the company continues to evolve, it is inspired by consumer trends such as the rise of cocktail culture and the desire for premium products.

Innovation watch: Responding to the tequila and mezcal craze

With the vast majority of products sold commercially, talking to bartenders is key to how the company innovates and launches new products.

“We never want to make the same product as another”explains Edith Giffard. “We have our own identity, our own spirit. Sometimes bartenders from different parts of the world come to us and tell us that we want this, so we are very close to the bartenders. Other times we say, “We’d like to do that”: then we’ll see if there’s a market for it. »​

Even the pandemic hasn’t stopped innovation. Although production stopped for a while (replaced at the distillery by the production of alcohol-based hand sanitizer), R&D was in full swing and – surprisingly – was actually one of the years with the more product launches.

One of them was the Piment d’Espelette: created by macerating peppers from the Basque Country with a touch of rum from Martinique: its alcohol level was 40% higher than that of the rest of the liquors of the company (which are usually around the 20% mark). Other recent launches include tea syrup concentrates (black tea and green tea): joining a syrup portfolio that includes everything from agave to crème brûlée and chocolate biscuit.

Piment d’Espelette is also part of the company’s premium range: which has been enriched in recent years with other liqueurs such as Apricot Rouge from Roussillon, Black Cassis from Burgundy and Banana from Brazil.

And it is a constant learning process, informed and developed from feedback from each market (approximately 70% of the company’s sales are made abroad). In the United States, for example, it responds to the enormous growth of tequila and mezcal.

“We have a very nice growing market in the United States, which of course is a huge market, people like cocktails, they drink a lot of cocktails in bars and restaurants,”explains Bruno Giffard. “It brings us to new ways of drinking that we don’t find so much in Europe. ​

In the Middle East, however, it’s the company’s line of syrups that shines. In a region with very low alcohol consumption, syrups give bartenders a range of colors and flavors to play with in soft drinks.

London, on the other hand, is heavily influenced by cocktail culture and a melting pot of traditions and cultures.

Now in its 25th edition, the Giffard West Cup Cocktail Competition began simply as a local competition in Angers, on the West Coast of France (hence its name), with family spirit and friendliness making up its basic philosophy.

The competition has since grown to include over 18 countries and approximately 800 bartenders;

The Giffard West Cup is all about the art of cocktail making, asking people from around the world to create drinks, according to a specific theme, with the winner from each territory coming to the historic Giffard Distillery, founded by the family in 1890. , to compete against other national winners in a live mixing contest. The Grand Finalists will compete in the final round where a final cocktail must be created to decide the fate of the 2022 Giffard West Cup Champion.

The theme chosen this year is “Listening to flavors”. Contestants will be asked to create a music-inspired cocktail with Giffard liqueurs and will have to make the connection with a song that inspires life behind the bar.

“Giffard believes that music permeates the universal work of bartenders, and this is consistent with the Giffard family’s historic belief in the strong and dynamic connection between mixology and art – a notion founded by Emile Giffard in 1885. This year , Giffard invites us to turn up the sounds, toast in our glasses and listen to the flavors” says the company.

Giffard liqueurs must represent at least 50% of the total alcoholic volume of the cocktail.

From March to June, a series of competitions in the participating countries will determine the national finalists, who will be invited to the Grand Final, which will take place from 25anduntil 28andof September. The winning prize is a visit by three teams of guests to bars in the winner’s chosen country, selected from a list provided by Giffard.

Production of 9 million bottles per year

The liqueurs are produced on a 50-year-old site in Anville, near the company’s historic roots in Angers. The production process is meticulous and complex: the fruits arrive at the distillery, where they carefully macerate to preserve the colors and flavors of the fruits (light, temperature and oxygen are enemies here).

Sugar is then added, the volume of which depends on the type of fruit, as well as sugar beet alcohol.

While liqueurs are the company’s original DNA, it has also been producing syrups since 1905. It wasn’t until 20 years ago, however, that the category really took off for the company outside of its French home market. Spotting an opportunity in Germany – a large neighboring market with enough similarities to France as well as a culture receptive to syrups – its syrup sales began to grow and continue to thrive thanks to today’s cocktail culture.

Unlike the production of spirits, which uses fruit, syrups use fruit juice. This is mixed with filtered water from the Loire and sugar from the north of France.

“You have to produce like a craftsman on an industrial scale”

What is most striking in Giffard’s installations is the color everywhere. The company’s products – reaching around 150 lines in total – offer an impressive palette of all kinds of colors and shades: each packaged in glass bottles to show off the vibrant colors of the fruit.

But it’s also by design, as a reflection of the base of each product (all products are made from real fruit or juice). “We wanted to have the product at the center“explains Bruno Giffard. “But the product goes into vats, and it’s not always easy to see the product, and we wanted people to smell the products. So we have the colors on the walls, outside, sometimes we have glass pipes, and we built a garden nearby to remind us that – without nature – we would be nothing.​

The facility has a number of initiatives to be as sustainable as possible. Large windows let in as much natural light as possible, which is good both for reducing the need for electric lighting but also for creating a more pleasant atmosphere in which to work.

And while the building was designed with bottom-up sustainability in mind, the company continues to make improvements: solar panels that supply 15% of the site’s electricity needs have just been operational.

The facility was built to balance a trio of requirements: the company’s artisanal mindset, the desire to be as sustainable as possible, and the need to meet the industrial scale of production required.

“When we produce, we seek to make handcrafted products”, says Bruno Giffard. “What is most important for us is to produce like an artisan – small batches, fruit and production control – but we have to do it on a larger, industrial scale. ​

“When we built the facility here, we had three main topics in mind. The first is to keep people at the center of the building – company workers need to feel good. The second is to have the product at the center. To produce syrups, we have juices, natural extracts – so we have colors on the walls and outside to remind people that we are working on syrups, and we have built a garden here to remind them that without nature, we are nothing. And the third is the environment: we wanted a sustainable building.​

So what’s the secret to the company’s success? For Bruno Giffard, it’s the family spirit and the long-term vision that goes with it.

“We have been in existence for 135 years, we always devote our energy to quality, to the people, to the fruits and plants that create our products. For us, it’s more important to look ahead – I took over with my sister from my father; my nephew and my daughter will be taking over the business – so success I think is very much about us wanting to do something we love for the people we love too, so we always put our hearts into making the best products. We’re not looking at the short term, we’re looking to be there for the long term. ​

“And when you look long-term, you’re more sustainable, quality-driven, and you develop relationships with our consumers, our suppliers, everyone around.”​