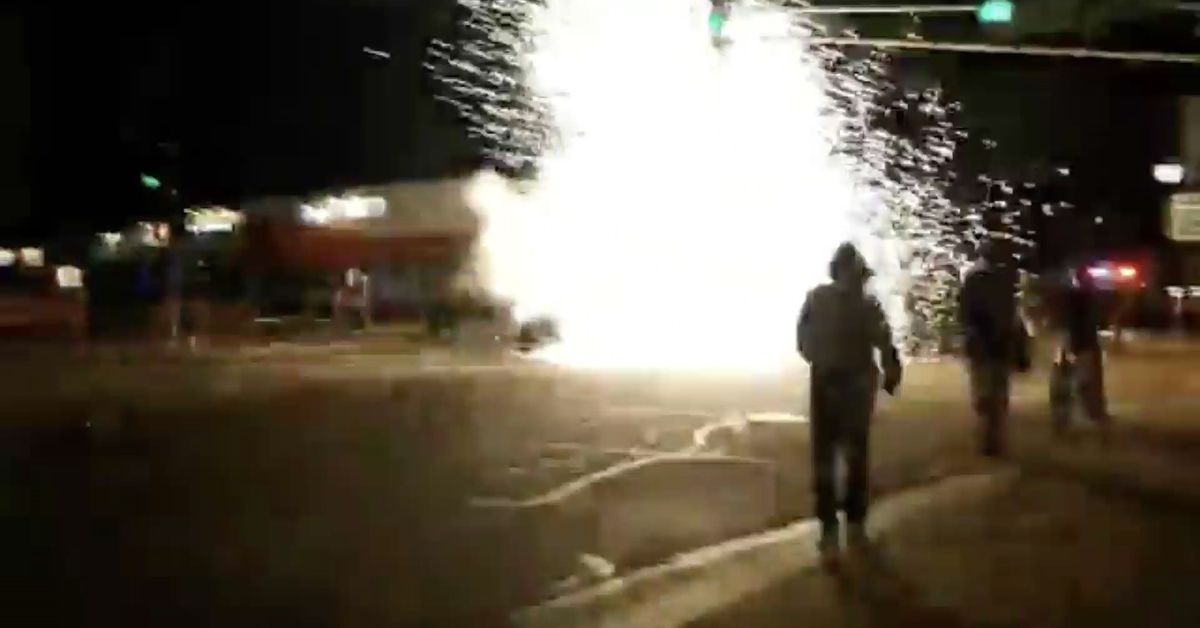 Naperville Sack: On a wild night in a western suburb, the police rise above


How were most of the protesters in downtown Naperville protesting Monday?

They were sane and responsible, albeit annoying as hell, marching, chanting, and stopping traffic. That was the point. If a demonstration doesn’t upset someone and push them to think about things they’d rather not do, it’s a failure.

They were restricted. Admirable. They were up to the task of their training. They endured teasing, name calling, and physical intimidation from people who didn’t even know their names. Who just saw cops, as if that was enough.

The burly guy with the long ponytail and the red shirt that started the looting? What an idiot. We hope they arrest him. We have a call to the Naperville police to find out. We can have hope.

We hope that all the jerks who did their best to turn around a peaceful protest over a deadly injustice, the way African American men continue to be killed without good reason by police and vigilantes, will be arrested.

But Watch the video, taken by a serene Aurora cameraman, James D. Buzzard. It lasts about three hours; there is a shorter version at the top of the online version of this editorial at suntimes.com.

Sixteen minutes after the video, several hundred protesters, young people of different backgrounds and colors, sit and kneel at an intersection outside Barnes & Noble. The traffic light changes from green to yellow, from red to green, but the cars are not going anywhere, they are backing up for blocks.

If you are in one of those cars waiting for you and you find this demonstration ridiculous, this is it. Now might be a good time to think about how a police officer in Minneapolis on May 31 knelt for more than eight minutes on the neck of a black man named George Floyd and killed him.

It is late in the afternoon. The sun has risen, but as the demonstration continues for another hour in this furious but absolutely peaceful way, the sun sets.

And the crowd gets thinner.

And those who remain fidget a little more when a police SWAT vehicle arrives at their place.

An hour and 20 minutes after the video, dozens of protesters are still kneeling in front of the bookstore. They raise their hands, as if surrendering, and say to a line of officers ten meters away: “Don’t shoot.”

An officer with a megaphone makes an announcement. You can’t see it, but you hear it: “You are disturbing the public peace.” Please “scatter”.

When Aurora police made this same announcement Sunday night, Buzzard says for the video, “The next thing you know, they started blowing tear gas.”

But there is no tear gas in Naperville. The police stand there, with their shields ready.

One hour and 29 minutes into the video, someone throws a firecracker, something big, loud and conspicuous, right at the feet of the police.

Buzzard he says to the camera: “Everything is going great” and “It only takes one idiot to screw it up.”

People run down the street, down an alley, to a parking lot. A few minutes later, they meet again, although now in even fewer numbers, in front of a furniture store.

After an hour and 33 minutes of the video, the idiot in the red shirt appears. He falls to his knees in front of the police. We cannot hear what you are saying. Then he gets up and walks the length of the line of officers, taunting each of them, sticking a finger within an inch of their faces and shields.

Someone off camera says “F … the police. F— the peaceful mutiny “.

After an hour and 33 minutes in the video, the idiot in the red shirt appears. He falls to his knees in front of the police. We cannot hear what you are saying. Then he gets up and walks the length of the line of officers, taunting each of them, sticking a finger within an inch of their faces and shields. Someone off camera says “F … the police. F … the peaceful disturbance. “

And now people walk fast, jog. Something is happening. The guy in the red shirt, putting things in motion, tries to kick the door of a store.

One hour and 36 minutes into the video, you hear the sounds of glass breaking. And again. Store windows are being vandalized.

Looters enter a clothing store. They take over everything. Someone escapes with a mannequin.

The destruction is almost accidental. Someone throws a stone through another store window while strolling.

Still no tear gas. There is no pepper spray. We do not see flying truncheons.

There are still no runaway police from a wealthy suburb beating up a defenseless protester, which the violent swath of protesters hoped to shoot and capture on cell phones, further dividing our divided country.

The Naperville police, like the vast majority of protesters until the fools took over, handle themselves with honor.

At an hour and 47 minutes, you hear explosions again. More fireworks, you realize. It is not a gun.

A minute later, the clown in the red shirt runs by again. Drop a sweater or coat that you didn’t have before.

Keep running, out of camera range.